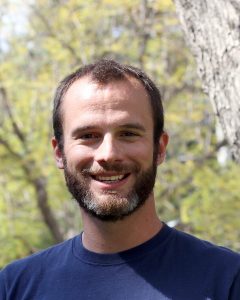 Dr. Ian Clark is being recognized for his exceptional leadership in developing new landing technologies for future space exploration.

You can’t explore Mars without landing safely on it first. The methods currently used have been around for over forty years, so NASA’s Low-Density Supersonic Decelerators (LDSD) team has been working to develop state-of-the-art technologies that will be used in future Mars landing missions. Leading this team is principal investigator and TIP alumnus Dr. Ian Clark. Clark is an engineer in the EDL Systems and Advanced Technologies Group at the Jet Propulsion Laboratory and a specialist in the area of planetary entry, descent, and landing (EDL). Clark has been working with his team to test supersonic parachute capabilities so that heavier vessels carrying exploration teams and vehicles can land safely on Mars.

Three summers of Clark’s youth were spent at TIP, where he first explored outer space with an astronomy class. He then went on to graduate with honors from Irmo High School in South Carolina. He was the only person in his year to have a perfect SAT score. Georgia Institute of Technology remains his only alma mater, where, in addition to his undergraduate degree, he earned a master of science and PhD in aerospace engineering.

Prior to his work at NASA, Clark served as a visiting assistant professor at Georgia Tech, where he advised and managed the EDL research group. He was recently recognized by President Obama with the Presidential Early Career Award for Scientists and Engineers. Clark is also a recipient of the JPL Lew Allen Award, the JPL Explorer Award, and NASA’s Exceptional Technology Achievement Medal.

My three summers at TIP were incredibly formative in part because of the opportunities to learn and explore in subjects I was passionate about and the environment that embedded me with kids who were similarly in want of nurture for their intellectual curiosity. I have vivid memories of the campus and classrooms at Davidson, of the trips off campus, and of Meteor Mike assigning us chapters out of A Brief History of Time as homework and teaching us stars and constellations at the Morehead Planetarium (‘Arc to Arcturus and take a hike-a to Spica’). I’ve shared those memories with my family and now my niece and nephew are getting the opportunity to experience that themselves as TIP scholars. 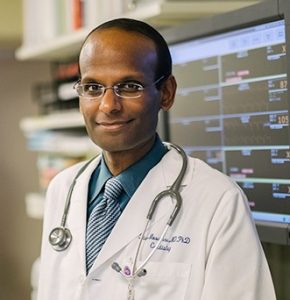 Dr. Kiran Musunuru is being recognized for his outstanding achievements in genetic research.

Growing up in Florida as the son of a renowned cardiologist, Kiran Musunuru decided to follow in his dad’s footsteps and become a heart doctor. The twist? He decided he didn’t want to just treat cardiovascular disease: he wanted to figure out how to prevent heart attacks in the first place. This drive has led him to win multiple awards and grants supporting his innovative pursuit to research the link between genetics and the world’s leading killer: heart disease. For this, he is being honored as one of our distinguished alumni.

Before graduating from Harvard College with a degree in biochemical sciences, Musunuru took part in three TIP courses, one of which was chemistry. He then went on to collect his PhD in biomedical sciences from The Rockefeller University, an MD from Weill Cornell Medical College, and his MPH in epidemiology from Johns Hopkins Bloomberg School of Public Health. He also completed postdoctoral work at Massachusetts General Hospital and the Broad Institute of MIT and Harvard. In addition, he has contributed to numerous medical textbooks and publications, and has won multiple awards for his research, including the Presidential Early Career Award for Scientists and Engineers. Today you can find Musunuru teaching as an associate professor of cardiovascular medicine and genetics in the Perelman School of Medicine at the University of Pennsylvania. 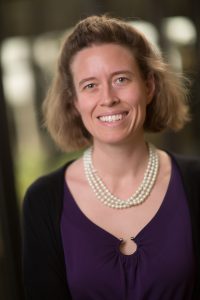 Dr. Alison Stuebe is being recognized for her significant contributions to the field of maternal-fetal medicine.

As a well-known scholar, teacher, mentor, and clinician at the University of North Carolina at Chapel Hill, Stuebe has received a number of professional awards, including a recent grant worth over two million dollars from the National Institutes of Health, awarded to study how changes in maternal and infant hormones form a connection between postpartum depression and breastfeeding. She was also named a Distinguished Scholar of Infant and Young Child Feeding at the UNC Gillings School of Global Public Health. Stuebe has perfected the blending of arts and sciences: her ability to translate and communicate her scientific findings to the broader public through tweeting, blogging, and media appearances has had a significant impact on public health programming and policy.

After graduating from Duke University with a BS in biology, Stuebe went on to earn her MD at Washington University School of Medicine and completed her residency and fellowship at Brigham and Women’s Hospital in Boston. In between practicing medicine and penning dozens of peer-reviewed articles, Stuebe also earned an MSc in epidemiology from the Harvard School of Public Health.

Though she didn’t know it at the time, Stuebe met her husband during one of her four TIP programs between 1986 and 1989. She reconnected with TIP alumnus Geoff Green later on at Duke, and they were eventually married by Gerald Wilson, one of their TIP instructors.

My four summers on East Campus were oases on my path through high school. In the classroom, I fell in love with writing, history, and political science. After class, I debated the meaning of life and formed lasting friendships. Without TIP, I can’t imagine who I would be today.