Then: A shy kid growing up in Miami who always carried a book. 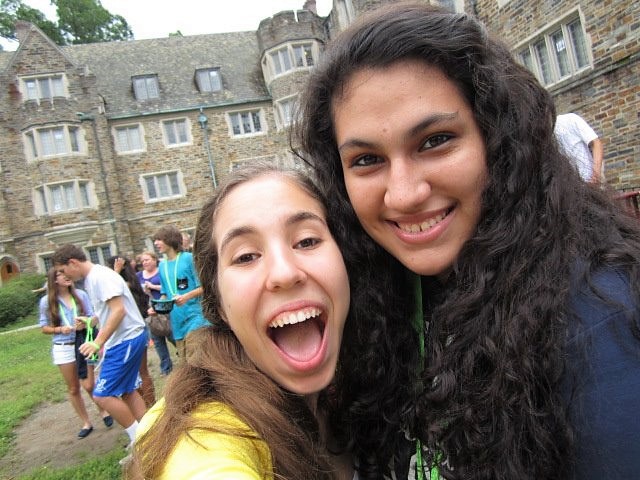 Now: A computer science major at Cornell University prepping for her internship at Twitter.

Where did you grow up?
Although I’m originally from Lima, Peru, I grew up in one of the most unique places in the United States: Miami, Florida.

What were you like as a kid?
I was a pretty quiet kid, always the one who did well in school and read a lot. In middle school, I always had a book with me whenever I’d go anywhere. Most weekends, my parents and I spent the day at the beach enjoying the waves and sunny weather.

How did you hear about TIP, and what, if anything, influenced your decision to attend a program?
A lot of my friends and I in middle school received the same information packet about taking the SAT to see if we qualify for this program called Duke TIP. Most of my friends just trashed it, thinking it was junk mail, but my seventh grade algebra teacher spoke to me about it and encouraged me to pursue it. In retrospect, I don’t know if I would have taken the test, since it was kind of intimidating as a middle schooler to take a test that my older brother had taken only a couple years prior, so I’m really thankful to my teachers for pushing me in the right direction.

Do you feel like TIP changed you?
I wouldn’t say TIP changed me as much as it helped me realize things about myself that I didn’t already know. For example, I knew when I was selecting a course for my fourth year that I was kind of interested in this thing called computer science, but taking Programming for Video Games at [Duke] West Term 1 really solidified that interest and gave me insight into what programming allows me to do. It also allowed me to gain a huge level of independence, since most kids from my hometown don’t spend summers away from home to learn a new topic.

Was there anything in particular about TIP that had a significant impact on your life path?  Did it influence your career path or choice in college? Or open your eyes to a new idea or perspective?
One of the greatest things I’ve gained from TIP is this wide network of incredible people across the world. In college now, career services always emphasizes the importance of networking, but I find that the organic connections developed in an environment like TIP are the most valuable to supplement your life later on. The friendships I made at TIP were extremely long and enduring to the point where I’m able to reconnect with TIPsters after all these years when I travel. Just last year I went to Boston for a hackathon and met up with one of my closest friends from my last year at TIP. We hadn’t seen each other in over four years, but our strong friendship from our time at Duke West made it so that it felt as if no time had gone by at all! He’s also a CS major himself, so while working on our hackathon project it was really amazing seeing how our skills have developed since our time in Programming for Video Games.

What’s been your greatest accomplishment since you did the program? Any cool experiences—internships, travel, life events?
I’m going to be interning with Twitter this summer as a software engineer!

What are you up to these days?
I’m currently a computer science major at Cornell University in the College of Engineering. On campus, I’m really involved with groups that supplement my education, like the project team Cornell Hyperloop, in which we’re currently trying to revolutionize transportation using high-speed technology solutions. I’m also really involved in groups that help promote diversity in computing as a way to give back to the many mentors and professors in my past that have helped get me to where I am today. Outside of school, I like to spend time in nature, travel on a budget, and spend time with my family at the beach back home.

Where do you think you would be if you did not attend a TIP program?
Realistically, I think I’d be in a similar place I am now, but with a different perspective. TIP really helped me recognize the value in an interdisciplinary approach to education. I took Programming for Video Games at Duke West, but I also took Abnormal Psychology the previous summer—that was one of the more interesting classes I’ve ever taken. So today, even though I’m studying computer science, I try to include courses outside of engineering into my curriculum as I feel it helps me grow into a well-rounded human with knowledge beyond just STEM.

I also think that I’d be a bit more like the person I was going into TIP my first year—a bit shy and always sticking to what I know. Although it’s definitely something I’m still developing even to this day, the openness to new experiences that TIP spurred in me has really propelled me forward in every aspect. Even just attending TIP, a camp far from home in the middle of summer, was a new adventure with incredible outcomes, and since then I’ve worked on pursuing new opportunities with open arms.

What advice would you give to younger TIPsters?
Go into your three weeks at TIP with an open mind, ready to learn a ton, have incredible experiences, and make lifelong friends. I know it can be really daunting, especially your first year when you don’t know what to expect, but TIP is really what you make of it. So take that class that you’ve always been interested in, volunteer for the pudding scoop challenge (it’s more fun than it is messy, I promise), perform your favorite song at TIP sync with your entire RAG, play Ultimate Frisbee with your class during lunch, sing “American Pie” at the top of your lungs, create new traditions, and take lots of pictures! Do whatever fun (and TIPpropriate!) things that’ll make any moment fun, because that’s really what TIP boils down to—a three-week long series of incredible moments that you’ll remember fondly for years afterward.