Every year around this time, we kick off the search for alumni who have gone on to achieve great things and make great accomplishments in their fields. We acknowledge these alumni with our Distinguished Alumni Awards.

Trey Ideker won the award in 2009. He is still teaching at the University of California at San Diego, but is making great strides in the world of cancer research and genetics. 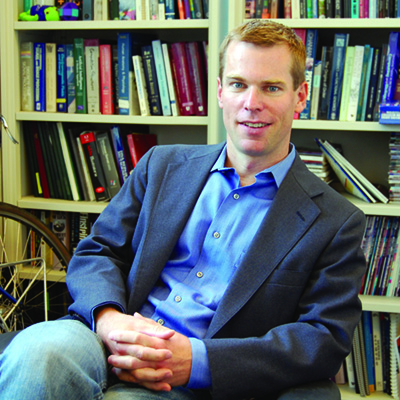 Did your experience at TIP influence your career path in any way?
TIP absolutely played a role in the importance of science in life and reinforcing that that was my career direction. One of the nice things about TIP is you can try lots of different things. It’s funny, you know, within science and within TIP I tried computer science, biology and astronomy. So, I sampled three areas of science that are about as different as they can be within science. I went in the computer science direction initially, and then, after that, got a PhD in biology. So, in a way, the only TIP course I didn’t focus on career-wise was astronomy. TIP did actually foreshadow my later career decision.

What types of things do you do on a day-to-day basis?
A faculty member will typically do a bit of teaching and a lot of research. We have a research lab and it involves experimental biology, so we’re basically trying to figure out how cancer cells work so that we can develop drugs that are tailored to specific cancer patients. The problem with cancer is that we call it one disease, but it’s actually many different diseases, each with a different treatment. So a lot of the excitement coming out of DNA sequencing and genetics these days is that it enables us to characterize every person’s cancer as a different genetic entity so you can see one patient has these seven genes mutated, another patient has a totally different set of genes mutated, and those mutations have led to their cancer. So, in other words, we’re now able, with genetic sequencing technology, to really distinguish between different cancers. What’s not yet clear is which differences we can see that are the important ones and which ones we should drop—which ones we should really focus on for treatment.

What has been your greatest accomplishment so far?
It’s not a single ginormous breakthrough; it’s more pushing and pushing and pushing to open up a completely new area. And so, in terms of between my time at TIP and as a professor here, I think we have managed to kind of forge this new area where you’re using methods from computer science and understanding analyses of large data sets. You hear about all these big data analytics and we’ve played an important part on how big data gets thought about within biology and, in particular, with the treatment of cancer. So is there any one breakthrough? There’s many medium size breakthroughs and the overall breakthrough is really just this study of cancer as an information science or data science.

What do you still hope to accomplish in your career?
I’d like to say I’d like to cure cancer, but what I’d really like to see our lab specifically do is—again with that mixture of computer science and biology—construct an artificially intelligent model in a computer of a cancer cell that you could then use to answer questions about how to treat patients. So, like a Siri of a cell for cancer, you would ask, Hey, my cancer patient is a fifty-seven year old woman with ovarian cancer, she’s got this BMI, this ethnicity, and here is her molecular information. She’s got these genes that have mutations, and sophisticated molecular stuff. And then the “Siri” would go, OK, your patient has this subtype of ovarian cancer, and it’s been found that these women respond particularly well to the following courses of therapy, and then it would spit out what to do. The reason for that is because just the ability to predict and explain what’s going on with the cancer patient is what the Siri of the cell would do and that’s what we’re working on.

What advice do you have for students today?
Don’t think just because people always ask you what’s your favorite subject that that means you’re just going to work in one of those areas. In fact, you might combine them in the future in really unexpected ways. And in our society, I don’t think my story is that unique anymore. You read a lot of stories about people who combine a couple of different disciplines. I would never have thought, and you would never have caught me taking a TIP course in writing or English. But you know what? I had to become a competent scientific writer. If you really boil down to what I do on a daily basis, over half of what I do is writing. First you write proposals to study something, then if you’re lucky you get the money, then you have to write more because you have to report your results in a scientific journal. I would never have predicted how much I actually like writing now.